This past weekend I watched a very interesting documentary titled, “Death By China.”

To summarize it in a few paragraphs… several years ago China became a member of the World Trade Organization. This, for the first time, opened up the doors to free trade between China and other nations. Perhaps, most notably, the United Sates. 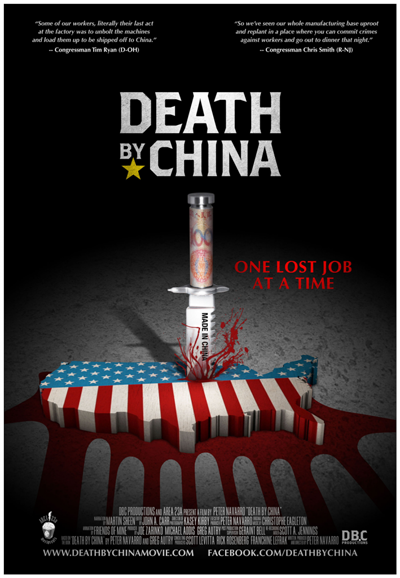 In the years that followed several things have occurred. First, the United States has accumulated a trade debt to China that numbers in the trillions of dollars. This is a result of a one way trade street. The US is importing goods from China, however, China is not importing goods from the US.

The second thing that occurred is many multi-national corporations moved their manufacturing from the United States to China. Jobs that were previously held by American’s, contributing to and building up the U.S. Middle Class, were now being shipped overseas to labour camps where workers can make as little as $0.40/hour.

America loses jobs but many products immediately become cheaper. This is why you can buy a 50” flat panel television for a couple hundred bucks now.

Just take a look at the labels on the products and goods you’re buying. The vast majority of them now say, “Made In China.”

On one hand, as a population, we’re outraged. We don’t want to see people lose their jobs. Families lose their homes. On the other hand, we love our cheap electronics and clothes and shoes and such.

What’s Does This Mean For Voice Over

But what does this have to do with voice over?

Each week I market my services to new production houses that create animated explainer videos and whiteboard videos. Some weeks a few, some weeks a dozen or more.

In the past several months I’ve noticed a trend.

The Globalization Of Production 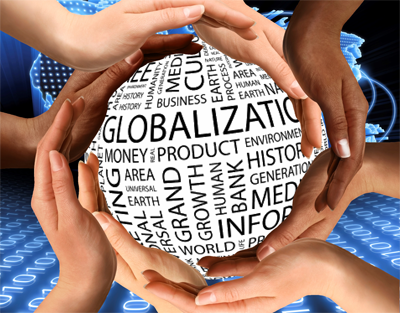 An animated explainer video that might cost a couple thousand dollars if produced in North America, will likely only cost a few hundred produced overseas. Sometimes, even less. Obviously the quality may not be the same. But think about it from the standpoint of a small business or start-up owner. If you can save thousands of dollars on a single video, odds are you’ll sacrifice a little quality.

I’m not going to turn this into a lesson on economics or an explanation of currency trading values from county to country. Quite frankly, I’m not smart enough for that anyway.

However, I will heed a warning.

The Globalization Of Voice Over Rates

Many overseas production houses simply can’t pay North American fair market value rates for voice over services. Think about it. When workers in foreign countries are sometimes working for a couple dollars an hour or less, how do you think they’re going to respond when you ask for $150 or more for a voice over?

The economies don’t line up.

This is why, more and more, I’m receiving responses from production houses that are recruiting and hiring their voice talents from places like Fiverr and other discounted freelance sites. They pay $5, $10 or maybe $25 for a :60 or :90 voice over.

Often it’s not because they’re offended by my rates or unwilling to pay my rates. It’s simply a matter of economics and currency from one country to another.

What Can We Do To Fix It 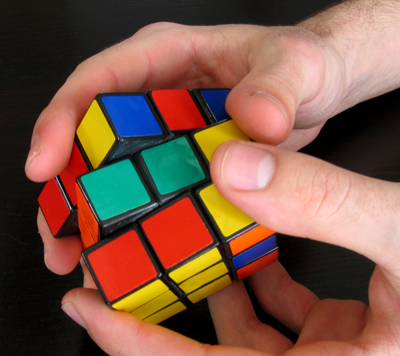 So how do we fix it?

There are a couple of things that we, as voice actors, need to take into consideration.

First, there needs to be an education process that takes place within our industry. An education that is passed down to amateur talent and those new to the business that are trying to establish themselves. Making fun of them and casting stones at them is not the answer. Nor is it productive.

We need to help them understand rates and market value for voice over services. This is one area where I’m grateful for an organization like World-Voices, whom I believe can help lead this charge.

Second, we need to look carefully at the companies we’re working with. There are a lot of overseas production houses with U.S. telephone numbers and a U.S. mailing address. It can be deceiving. They do this to draw in U.S. clientele. Often clients are none the wiser about where the actual business is located. All they see and care about is a video they thought was going to cost them $2,500 is now only costing $500.

Third, we need to stop working with super discounted production houses ourselves. I have several overseas clients I’ve worked with for years. They’re great companies, they understand value. They’d never try to get me to do a $25 voice over. Others, however, will always be able to find talent who will work cheap. This is inevitable. But, as the saying goes, you get what you pay for.

How many times have you voiced a project that is being redone because the original cheap VO was bad and the client was unsatisfied? I’ve done it many times. In fact, I just did it last week!

Finally, we need to encourage, work with and promote the North American based production houses that we partner with. We need to take pride in the quality of their work and in the level of excellence they provide. The more we can bring prominence to these companies, the better it will be for our industry as a whole.

Adaptation To A Shifting Reality

The purpose of this post is not to bash overseas production houses, nor is it to call out North American companies that employ their services.

Rather, the purpose is to educate voice actors on the economic dynamics that are playing a more and more prominent role in our industry. No different than how free trade with China has resulted in cheap TV’s for everyone, a global production market can, and is, resulting in a rate swing in the voice over industry.

It’s easy to sit in our studios and gripe about the newbies charging pennies for their services. The reality, however, is the issue goes far beyond that. Globalization is now driving prices down in the voice over business just as it has in nearly every other business.

It will be up to us to adapt and promote practices that can hopefully reverse, or at least, curb the trend.