“How much more energy should we devote to this nonsense?”

“Wouldn’t we be better off letting it go and worrying about our own businesses?”

These are some of the comments I’ve received and read regarding the ongoing discussions about online casting sites and their business practices. Some people are simply tired of hearing about it. I understand. Believe me, I understand. I was one of those people.

Personally, I’ve had enough of the complaining. My complaining gauge peaked and shattered a long, long time ago. Complaining, in my opinion, does nothing to solve the problem. Venting amongst ourselves in closed and private groups may offer a form of therapy, I won’t deny that, but it’s not going to affect change.

That’s what happened this past weekend at VO Atlanta. One of the most productive dialogues regarding online casting sites since the “Interview Heard Around The World” hosted by Graeme Spicer, took place. Oh, and Graeme was still a part of that conversation, and still considered a hero amongst many,

J Michael Collins brilliantly moderated a panel discussion with leaders from Realtime Casting, bodalgo, Voice123 and Voices.com. Each of these representatives was given time on the stage to speak to the audience, answer questions and address issues.

Let’s just say, some did better than others. Yes, it’s true. Armin is a Rock Star.

For those questioning if it’s time to move on, allow me to offer you two really great examples of why it’s not.

Since that panel discussion took place on Friday March 4, 2016, two of the sites have actually made changes. Changes that are a direct result of concerns raised by talent.

The first change that occurred came from Armin Hierstetter, the one man show, CEO and Rock Star behind European casting site bodalgo.com. 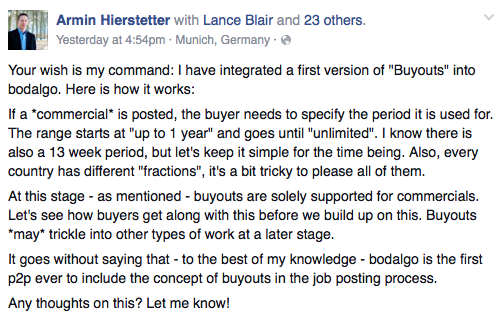 A second change was announced today. This one, from Voice123 CEO Margarita Rueda. (It’s also worth noting, Margarita offered assurances to J Michael Collins during the panel, that his worst nightmare would not occur. He never has to worry about waking up one day and finding Voice123 has been taken over by a certain bunny!)

These two changes, which may seem small to some, actually bear great significance. They offer evidence that when we, as a community and industry, collectively engage in productive conversation – as VO Atlanta Executive Producer Gerald Griffith put it, “more Oprah, less Springer” – change can happen.

Don’t, for a minute, ever fool yourself into believing these sites will give into all our demands. In fact, don’t even expect some of the sites to hear us out at all – as we’ve learned. We must never forget, these companies are still businesses and they’re still looking for ways to generate and maximize profits. It’s their right to do so, as it’s our right to do so in our own businesses.

However, if we continue to maintain an open dialogue, good things can, will and – as evidenced in the last two days – have come from it.

Online Casting isn’t going away. This we know. That leaves us, as talent, with a few options. 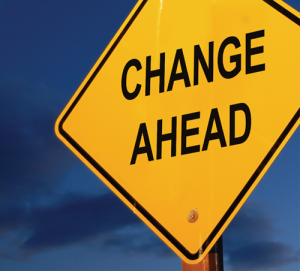 I’m thrilled to know that at least a couple of the sites are willing to hear us out. Quite frankly, it’s their prerogative to tell us to take a long walk off a short dock, if they so chose. They don’t have to listen to us make suggestions for how to run their business anymore than you or I need to listen to them make suggestions for how to run our businesses.

Let’s respect the opportunity, and find ways to respectfully make the most of it. For the good of talent, clients and casting sites.

Maybe, just maybe, as the dialogue continues, and sites like bodalgo and Voice123 show respect to talent by hearing and addressing our concerns, the other elephant in the room might decide to follow suit.

It’s worth a shot!

Where Do We Go From Here?

That said, knowing what we know, that these sites are here to stay, it’s in our best interests to try and help shape them. If I may be so bold, I’d even suggest lending your support to the ones who are listening.

In the interest of full disclosure, I was so impressed with Armin at VO Atlanta, that I signed up for a 6 month subscription to bodalgo this week. His presentation earned my business! If I’m going to be on a site, it’s going to be one that respects the talent that make it work!

That’s just one more way we can have influence. By removing our support from sites who won’t engage with us, and giving it to sites who do. If enough people do it, who knows… maybe that will affect change too.

So… is it time to move on? That’s entirely up to you. For me, however, as long as productive dialogue is an option on the table, I’d like to be a part of it.

If you were unable to attend VO Atlanta and watch the casting site panel, it’s truly worth it if you’re using casting sites. Find out how you can watch the entire discussion at voatlanta.tv