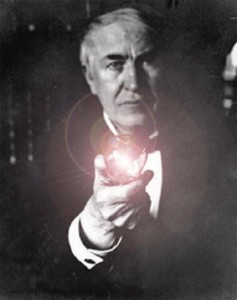 How many voice over auditions did you submit this week? How many did you book?

What about last month? How many auditions did you submit in October? How many did you book?

In baseball, an above average player bats .300. That means that greatness in Major League Baseball, at least as far as hitting is concerned, requires a player to hit the ball only 30% of the time!

Dale Earnhardt Jr. is arguably the most popular driver in NASCAR. He went 143 races without a win.

Santana released his first record on the Billboard Hot 100 on October 25, 1969. He didn’t score his first number 1 until 30 years later on October 23, 1999. Three decades of trying, before finally reaching number 1!

Thomas Edison, perhaps the greatest inventor that has ever lived, tried 10,000 times to create the incandescent light bulb. Of his efforts he famously quipped, “I have not failed. I’ve just found 10,000 ways that won’t work!”

The voice over business is hard. The competition is vast and great. Some weeks, or maybe even months, you’re going to submit dozens upon dozens of auditions and feel like nothing is going your way. I’ve been there. In fact, I’d be so bold to say that any voice talent who tells you they haven’t is probably lying.

The reason why so many people don’t make it in this business is because they’re in it for a quick buck, and friends, there’s no such thing. Ask any talent who has achieved any level of success and they’ll tell you it doesn’t happen overnight. It takes years of working your butt off. It takes thousands of rejections.

Are you willing to hang in there for the long haul? Would you go 143 races between wins? Or would you quit racing? How many records would you record trying to get to number one before you choose a new path? 30 years worth? Do you have what it takes to uncover 10,000 ways not to make a light bulb?

Failure is only such when you allow it to be. For those with persistence, it’s merely temporary defeat.

Push the reset button on your mind this weekend. Relax. Have fun. Recharge. Then come back Monday and get ready to start plugging away at it again.

QUESTION: Would you be willing to give it 10,000 tries before success? Or you in voice over for the haul?