All through elementary school I was a runner. Not a track superstar runner, but a runner nevertheless.

Mostly, I give the credit to my mouth. You see, I needed my legs to carry me to safety when my mouth frequently got me into trouble. Whether I was outrunning mom and her wooden spoon or some punk kid in my school, seldom did I get caught. I even won a few races here and there.

In Grade 9 I was running a race and my right knee gave out. I face-planted on the track, picked myself up, carried on with the race, and still managed to win. I decided then to go out on top. Retired. In Grade 9.

In the two plus decades that have followed since my Grade 9 retirement, the only time I have run is when my fire department pager goes off. Thankfully, I live about 500ft from the fire hall, so I don’t have to run far.

Beyond that, I’ve have no desire to run. In fact, it’s something I’ve never given as much as a thought to.

Until two weeks ago. 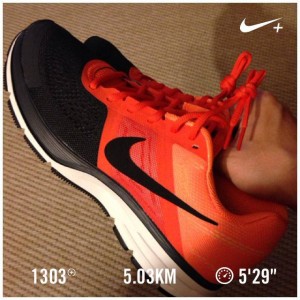 June 24, 2014 I went out for my evening walk. Or, I suppose it would be my late night walk, on account of it was after midnight. For some reason, I got the bright idea that I’d run. I downloaded the Nike+ app and thought to myself, “what the heck?!”

I suspected I’d make it to the end of my street, collapse in a pool of sweat, tears and puke, and there, in all my un-glory, I’d die. All that would be left for me is the humiliation of calling 911 and having to be discovered by my fellow firefighters. When a firefighter has to call 911 for the fire department, he has to put up a case of beer. At least I’d be dead, so I wouldn’t have to buy beer.

Instead, much to my shock and amazement, I ended up running 3.21km in 21:02. Now, granted, this is not exactly world record time. But for me, to me, it might as well have been!

What Doesn’t Kill You

Two weeks ago, I was retired from running. I had been since Grade 9… over two decades ago! Two weeks ago I was pretty sure if I ran any further than the end of my street, I’d die. Two weeks ago if you had told me I’d run 5km in under 28 minutes within two weeks, I’d have referred you to my shrink!

The Impossible Is Possible

I’ve got some stuff I’m working on in my life right now. Stuff that, to me, under current circumstances, seems impossible. At times I’ve wanted to quit. Throw in the towel. Walk away. Find new goals. Hopes. Dreams.

When I finished my 5km run on July 7, 2014 the very first words out of my mouth were, “thank you, Jesus. For showing me that maybe the impossible is possible after all.”

Now, I don’t want to give up on those things anymore!

Don’t let your dream(s) die. Maybe the impossible is possible after all!