Recently I read a book about Apple Design Guru Jony Ive (Jony Ive: The Genius Behind Apple’s Greatest Products). In it he discussed the process of submitting a new idea or design to Steve Jobs.

As anyone who is even slightly familiar with Steve Jobs knows, his personality was, shall we say, temperamental? If he didn’t like something, and he often didn’t like new ideas, he wasn’t afraid to tell you straight up.

“This is s+++,” was apparently one of his most often quoted responses.

Jony explained that the trick to presenting something to Steve and walking away with a positive result was to give him options. Generally, three.

The first option would usually be the worst. In fact, in some instances the first option presented wasn’t even a real option at all. Just some random choice offered up in hopes of receiving the “this is s+++” response. You know, to try and get that out of the way.

Option number two would be more viable. Closer to what the final option would be. Something that would peak Steve’s interest, but still likely wasn’t enough to garner his approval.

Then there was option three. This was the option Jony (or the team) really wanted to pursue. The option they wanted Steve to give the go-ahead to. Their thought process was simple. By providing two less than stellar options, it helped to elevate the final option even further.

This trick seemed to work for Jony and his team. More than once.

Could it work for you too?

The Jony Ive Approach To Auditions

In many instances I have clients send me scripts with very specific directions for the type of read they’d like to hear on an audition.

But sometimes they don’t. Sometimes it’s entirely open to interpretation. “Give us what you think,” they say to me.

In those instances, I’ve always employed the same technique that Jony Ive used on Steve Jobs.

I provide the client with two or three options. One or two that might work or the client might be intrigued by. Then one option that I feel is the best option.

Many times over the years, this strategy has worked out perfectly. The audition (or two) that might not be as good a fit often make the other choice stand out even more. Although, that said, a few times, much to my surprise, the client has gone for one of the options I would’ve never actually considered.

Next time you’re submitting an audition and not 100% sure on which direction take, try the Jony Ive approach. You never know, it might just lead to more bookings!

A couple weeks ago I wrote a post titled 5 Ways To Improve Your LinkedIn Profile. One of the tips I recommended was adding demos to your Experience section. Since that post, I’ve had a few people email to ask me how to do that. So I thought I’d write a quick post to show you.

Add Demos To Your Linked In Profile

The first think you need to do is access your LinkedIn profile and get it into edit mode.

Once you’re in edit mode scroll down to the Experience section of your profile.

From there you’ll click the icon to add a link or upload a file. I’ve created YouTube videos for all my voice over demos, so I just add the links to those demos. You can do the same or you can upload actual files.

After you’ve added your link or uploaded your file your profile will look something like this. There doesn’t appear to be a limit to the number of demos you can add. I currently have seven videos listed. 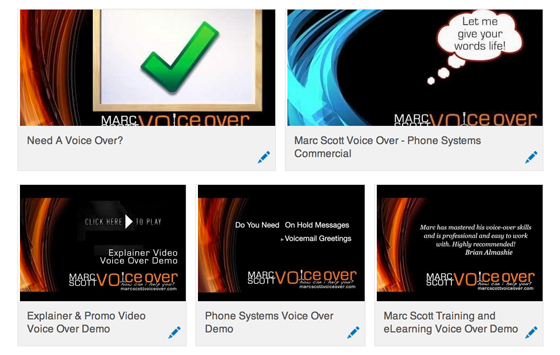 Are we connected on LinkedIn yet? If not, send me a request. I’ll happily add you to my network. Check out my profile at ca.linkedin.com/in/marcscottvoiceover/

When I was a kid I went though a science phase. Why? I have no idea. Truth is, there’s not a scientific bone in my body. The only course I ever failed in school… science! Nevertheless, for some reason, I went through a science phase. To that end, one Christmas I only wanted two gifts. A microscope and a telescope.

I got them both. 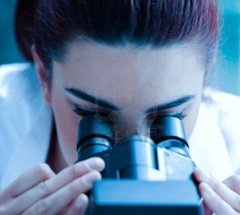 My telescope offered an entirely different perspective. A big picture perspective. Oh sure, I could pick a star and try to focus on it, but I’d see all the others around it as well. I could see far and beyond. A wide angle view.

Auditioning on a voice over casting site can become an almost robotic practice. Particularly if you’re submitting multiple auditions a day. It’s so easy to crank out a quick read, drop in your template proposal, click submit and move onto the next one.

That’s what I would call the microscope view of voice over auditions.

On the other hand, what if you took the time to really read over the directions provided by the voice seeker? What if you took a little time to find out who they were? To research their background? Maybe listen to some past projects they’ve posted on their web site or YouTube channel. What if you were able to get a bigger picture view of the seeker and their needs?

That’s what I would call the telescope view of voice over auditions! 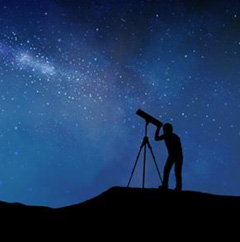 A lot of jobs you’ll audition for on a casting site are quick one offs. But not all jobs and not all clients are created equal. Do you know how to spot the difference? And will you be prepared if you do?

Thanks to one particular casting site and some big picture telescope views, I’ve been able to see beyond single job postings and single auditions to have the opportunity to develop some great long term relationships with some very big clients!

…not all jobs and not all clients are created equal.

Taking a few extra minutes to dig into each audition and think beyond the single script that’s right in front of you could mean the difference between booking one job and booking a dozen! Between a one off client and long term relationship!

QUESTION: What lens are you looking through?

The Voice Realm is one of many options available to voice talent looking for online casting sites. But what makes it different from the rest? What makes it a site you might want to consider becoming a member of?

I recently interviewed Lauren Maree from the Voice Realm to learn more about the site and how it continues to grow and improve. END_OF_DOCUMENT_TOKEN_TO_BE_REPLACED 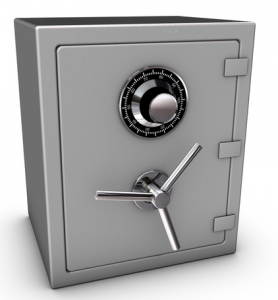 I received an email the other day about VO Demo Safe. Truth be told, it was a site I had never heard of, though I learned it’s been around for least a few months now. Regardless, I figured that if it was new to me, it might be new to others as well.

For that reason I reached out to the sites founder, Bob Taylor, to find out a little bit more about this new service available to voice talents. END_OF_DOCUMENT_TOKEN_TO_BE_REPLACED