I’ve never been a big fan of winter. I think it’s mostly the cold I don’t like. Actually, it’s the cold and the snow. Outside of that, I suppose winter is a grand season. Beyond the cold and snow, what else is there? Christmas comes during winter. That’s a good thing. The birth of Jesus. Turkey Dinners. It’s A Wonderful Life. Cranberry Ginger-ale. Come to think of it, maybe winter isn’t so bad after all.

There is one thing about winter that I do love. Despite the fact that I loathe large snowfalls and the shoveling and the driving, there is a scene that captivates me each time I see it. There are, in my opinion, few scenes in nature more breathtaking than a fresh snowfall. 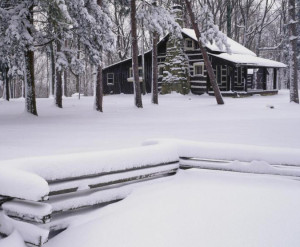 A blanket of pure white caresses all that will hold it. Color becomes irrelevant because everything looks as one. Sunlight twinkles and dances from the reflections off the newly rested flakes. There are no footprints, no tire tracks, no trails from a child’s toboggan. There’s just an untouched, smooth covering over the land as if the world was dressed in marshmallow.

It’s a perfect, beautiful scene. Pure, crisp, clean. I could look at something like that all day and never grow tired of it. I find myself torn between two desires. There is a part of me that wants to leave the scene without so much as a blemish from a step of my foot. This pristine natural wonder is too romantic, too enchanting to be disturbed.

Then there is another part of me. The part that wants to throw myself into it. I look upon the canvas God has painted and I long to be in it. A fresh layer of snow simply cries out to enjoyed. A snow angel needs to be placed in it’s midst. There are forts to be built, toboggans to be ridden, and Frosty can’t come to town and play if nobody takes the time to roll him into existence.

It really is a true thing of beauty. Just another wonder of God’s creation. Regardless of how I feel about the cold, my feelings for winter aside, I will always take time to look in awe upon a fresh snowfall.