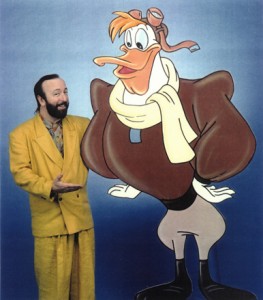 Two weeks ago on the Saturday Morning Cartoons series I featured Jim Cummings. He was responsible for bringing to life one of my all time favourite cartoon characters… Darkwing Duck.

For those of you that watched Darkwing Duck you know that Darkwing couldn’t have fought crime in St. Canard without his trusty sidekick Launchpad McQuack.

If you’re really up on your Disney cartoons you’ll further know that Scrooge McDuck wouldn’t have got far without the services of the flying ace either. After all, if a rich duck is going to fly, he’s going to need a pilot!

McGovern may have brought to life one of the great cartoon sidekicks of all time, but that isn’t his only claim to fame. As the story goes, he is also responsible for the term “Wookie.”

Geoge Lucas told the story in a 1977 issue of Rolling Stone Magazine, “We were riding along in the car one day and he (Terry) said: “I think I ran over a Wookie back there,” and this really cracked me up and I said, “What is a Wookie?” and he said, “I don’t know, I just made it up.”