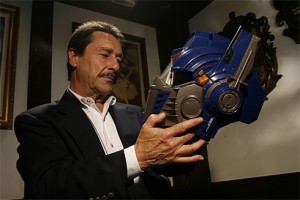 One of the things I’ve enjoyed most about this Saturday Morning Cartoons series is the discovery of just how many characters some amazing voice actors are responsible for. I’ll know them for one particular character voice and in my research discover that they may have been responsible for dozens more.

I also enjoy learning about the contrasting characters. For example, when I did my post on Jim Cummings, who I knew as the voice of Darkwing Duck, I also learned that he was the voice of Winnie the Pooh. Talk about opposite ends of the spectrum!

Today I have another one of those contrasts.

On one hand you have the leader of a powerful robot race from a distant planet. On the other hand, you have the solemn and rather cuddly sidekick of the previously mentioned stuffed bear.

Would you have ever guessed that the same man that voiced Optimus Prime was also the voice of Eeyore?

If you don’t believe me, watch this clip of Peter Cullen.

Optimus Prime was always my favourite Transformer. I used to watch that cartoon loyally. No matter how hard I try, even after watching the video, I can’t wrap my head around the idea of Prime and Eeyore being the same guy. That’s the magic of voice-over!

In addition to Eeyore and Optimus Prime, Cullen also brought to life characters in the Adventures of the Gummi Bears, TaleSpin, Chip ‘n’ Dale Rescue Rangers, DuckTales and G.I. Joe. You can see a complete (and long) list of his credits here.