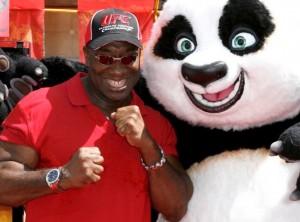 I think it’s safe to say we were all caught off guard with the news of the tragic passing of actor Michael Clarke Duncan. He was only 54, and I have no doubt he had many more memorable roles in him just waiting to be delivered.

Personally, I think I’ll always remember him as Bear, singing “Leaving on a Jet Plane” while strapped into a space shuttle, setting off the save the world from certain disaster. Armageddon was his first major film role.

For all the times you watched Michael Clarke Duncan on screen, you may not have realized that you probably heard him just as many times or more. He was actually a very gifted Voice Actor. Why wouldn’t he be? Just listen to that voice!

Ducan’s list of Voice Acting credits was long and included not only movies but many video games as well. Among some of those credits were Brother Bear, The Land Before Time XI, Air Buddies, Kung Fu Panda and the Green Lantern. For complete list of Duncan’s impressive credits click here.