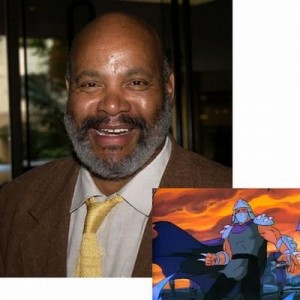 One of the reasons I love doing this Saturday Morning Cartoons series on my blog is because of the contrasts that it puts on display. It’s like listening to the radio and trying to decide what the announcer looks like. So many times, when you finally meet them or see their picture, it’s nothing like you expected.

It’s the same with cartoons.

When Will Smith’s mom in West Philadelphia got scared, she packed his bags and sent him to Bel Air. He moved in under the roof of Uncle Phil. A conservative judge and socialite with more patience that most of our parents probably could have ever mustered.

Now let me ask you a question. Picture Uncle Phil for a moment. Now picture a threatening evil Asian ninja master. Can you superimpose those images? Can one be the same as the other? It seems like a bit of stretch doesn’t it? Like a pretty significant contrast. But thanks to Saturday Morning Cartoons, it’s actually very real.

James Avery, also know as Uncle Phil, was actually also known as Shredder! In fact, he voiced the character in over 100 episodes of Teenage Mutant Ninja Turtles!

James Avery has lent his voice to many different projects including cartoons such as The Real Ghostbusters and Aladdin to an animated story book version of The Lion King. He even played another ninja. He’s credited as Ninja Master Head in The Problem Solverz TV series. You can see a complete list of his credits here.