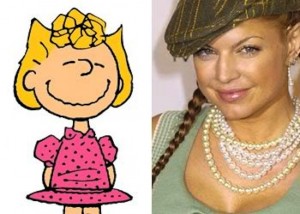 You’re never going to believe this one. I’m not even sure if I believe this one and I’ve been doing the research and checking my facts for an hour just to be sure! This could be my most surprising Saturday Morning Cartoons post yet!

In 1975 a star was born. The daughter of devout Roman Catholic School teachers Theresa Ann and Jon Patrick Ferguson. I’m sure on that unsuspecting day in March, they had no idea what the future would hold for their baby girl. Fame. Fortune. A little boom boom pow. Before she graced the Superbowl stage and reminded us that big girls don’t cry, little Stacy studied dance and did… of all things… voiceover work!

She also dabbled in acting. From 1984 to 1989 she appeared in Kids Incorporated. In fact, she holds the record as the longest running cast member. You may also remember her from roles in such fine shows as Mr. Belvedere, California Dreams and Married With Children just to name a few.

What you likely would never remember her for, because you likely had no idea she did it… is for her role as Sally Brown. That’s right… Stacy Ferguson, aka Fergie, was one of the original voices of Charlie Brown’s little sister. She voiced the character in two movies, It’s A Flashbeagle, Charlie Brown (1984) and Snoopy’s Getting Married, Charlie Brown (1985). She also provided Sally’s voice in the television series the Charlie Brown and Snoopy Show.

Now that her music career is taken off, she hasn’t done as much voice work. However, she has stated that she can still do the voice of Sally. So rest assured, when the live action Charlie Brown movie gets made, (and we all know one day it will) I’m sure that Stacy Ferguson will have her name in those credits! For more on her voice acting career click here.