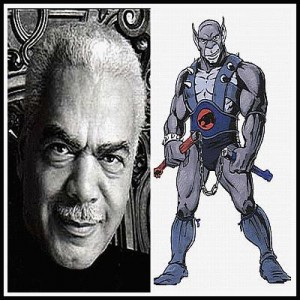 That’s something I love about Saturday Morning Cartoons. The mystery and surprises!

Arthur Rankin Jr and Jules Bass will forever be associated with the Christmas season. If you don’t recognize the names right away, you’d definitely recognize their work. They created numerous stop motion Christmas specials beginning in the 60’s. Among them, Rudolph the Red-Nosed Reindeer, The Little Drummer Boy, Jack Frost and The Year Without Santa Claus.

Their work didn’t stop there.

In 1984 Rankin/Bass Productions began creation of a cartoon that originally aired for 4 seasons and included 130 episodes as well as a movie. The show followed a team of heroes from a planet called Thundera. The heroes, as you may have guessed, were cat-like humanoid aliens called ThunderCats.

I’ve made the connection to Rudolph, but you’re probably still wondering about the connection the one of televisions most famous families of the 80’s. Here is is… Earle Hyman played the role of Russell Huxtable from 1984-1992. That of course would make him the father of Heathcliff Huxtable in The Cosby Show. Earle also voiced one of the leading roles in ThunderCats. That of Panthro.

I wish I could have found a better clip, but this was the only thing an hour of Internet searching produced.

Panthro was basically the only voice acting role that Hyman had to his credits, but when you’re claim to fame is being Bill Cosby’s TV dad, how many more credits do you really need? Hyman retired from acting in 2001. For a list of his credits click here.