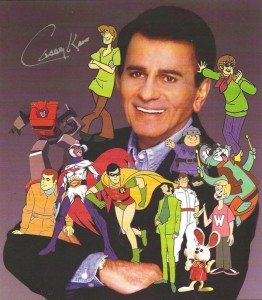 When I was a kid I thought Casey Kasem had the greatest job ever. I thought this, because as far as I knew, he only had to work four hours a week. This assumption, if I’m being honest, is what set me on a path towards a career in radio.

I wanted a job where I only had to work four hours a week too!

What I didn’t realize initially about Casey Kasem, was that he was also a voice actor. He provided the voice of characters on some of my favourite cartoons growing up. Once I made this discovery, it only made him even cooler to me. That made me want to be like him even more! I was convinced, from about the age of 10, that one day I would grow up and work four hours a week hosting a radio countdown, and in the rest of my free time, I’d do voice over work for cartoon characters!

Here are some facts about Casey you may not have known. His radio career started in the 50’s when he worked as a disc jockey in Flint, MI. In 1952 he was drafted into the U.S. Army and was sent to Korea. There he was a DJ for the Armed Forces Radio Korea Network. He’s worked on Sesame Street. For many years he was the voice of NBC. But, without question, his most famous voice work was on Scooby Doo!

Casey’s list of cartoon credits, many with Hanna-Barbera, is a long one. He provided countless voices for the Scooby Doo series. He was also the voice of Robin, The Boy Wonder in several different Batman cartoons. In 2010 Kasem officially retired, although it seems you can never keep a voice actor out of the studio for long. He continues his long and storied career as the voice of Colton Rogers, Shaggy’s dad, on Scooby-Doo! Mystery Incorporated. To see Casey Kasem’s list of credits click here.

Question: Who inspired you to pursue voice acting?