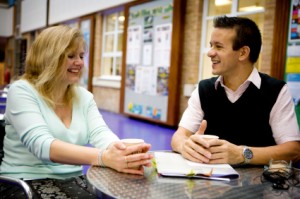 “We DO NOT want you to sound like an ANNOUNCER!”

How many times have you read or wrote that in audition instructions before?

“We want this script to sound friendly. Like you’re talking to a friend. Not ‘salesy’. More ‘guy next door’. We really want this read to sound conversational.”

Ah yes. The magic word. Conversational. As a purely unscientific estimate, I’d be willing to suggest that at least 70-80% of the jobs you’ll audition for these days will use the word “conversational”.

How then, as a Voice Talent, do you sound more conversational when you’re reading to a microphone and not actually talking to your friend?

How, as a Voice Seeker, do you prepare your script in such a way that it can sound more conversational?

I was reading a script yesterday that was supposed to sound conversational. Here’s the problem. It used every long form term in the dictionary. I am. You are. Do not. There is. You will. It wasn’t written conversationally at all. In fact, it was quite the opposite. It sounded very proper. Very stuffy. Robotic.

Let me give you an example of what I’m talking about. Consider the two sentences below. The first is written as the script I was just discussing was. The second is the way I’d re-write the script if I wanted to try and make it sound more conversational.

I am going to tell you about a product you do not want to miss. You are going to love it. There is a good chance you will thank me later.

I’m going to tell you about a product you don’t want to miss. You’re going to love it. There’s a good chance you’ll thank me later.

When I’m talking to my friend, I sound like the latter more than the former.

The absolute easiest way to make a script sound more conversational is to write it like you’d say it if, in fact, you were talking to a friend.

If you’re the Voice Seeker preparing the script, make sure you write it with contractions. Make it sound loose. Comfortable. Like the guy next door would actually talk! If you’re the Voice Talent recording the demo and the script isn’t written that way, record two versions. One the way it’s written. One with the contractions. If the client really wants conversational, I’d be willing to bet they’ll use take 2 every time.

Good luck with all those conversational auditions today! 😉