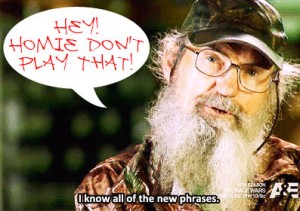 Duck Dynasty is one of my favourite shows on TV for a few different reasons, not the least of which is… it’s hilarious!

Growing up in the country I have a little bit of red in my neck, and I’m not afraid to wear it proudly. Granted, I’ve got nothing on the Robertson clan, but hey, those are some people I’d love to hang out with!

Si is probably my favourite character, if I had to pick just one. You never know what he’s going to say but you always know whatever it is, it’ll be hilarious, it may not make sense, and you’ll want to share it with your friends.

In recent episodes Si said two of my absolute favourite expressions from my youth. Expressions I haven’t heard in a decades and it made me want to bring them both back to the limelight.

So I’m curious. If you could bring back a crazy expression from your youth, what would it be? Share it the comments below.