I’ll be the first guy to tell you if you want to be more successful, spend more time reading books and less time watching TV. In fact, I have told you this before. Ok, well, maybe not you specifically, but I’ve definitely shared this line of thinking on this blog and my social media profiles.

It’s pretty hard to argue with proven stats, and the stats clearly show that the most successful people follow this simple rule.

Two weeks ago I had emergency dental surgery to remove a wisdom tooth. Roughly 15 years ago I had a couple wisdom teeth removed. It was no big deal. I drove myself home from the dentist. I was back to work the next day. A lot has changed in 15 years, apparently.

This time around, I spent a week and a half on my couch in complete and utter agony, moaning endlessly in pain and wondering if would ever end. 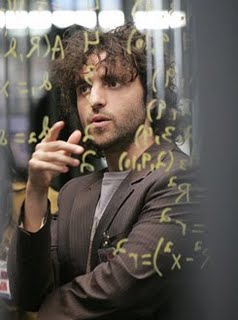 To pass the time, I decided to do something I wouldn’t normally do. I binged watch a TV show. My show of choice, NUMB3RS. Remember that one?

The show follows the life of Professor Charles Eppes. A math genius who uses his skills to help his brother, FBI Agent Don Eppes, solve crime.

Other characters such as Mathematician Amita Ramanujan and Cosmologist Dr Larry Fleinhardt also join the team. Using their brilliance and outside of the box thinking, they come up with some pretty creative ways to catch the bad guys.

What I love about the show is that outside of the box thinking. The way to approach problems from a completely different angle.

Normally, I’d consider such a use of time to be a waste. For the record, 119 episodes is A LOT of time! But watching the team brainstorm. Listening to them talk through problems. Seeing their inspired moments… it genuinely ignited similar activity in my own mind.

But what does it have to do with voice over?

In this business, we’re prone to following very traditional paths for work. Join a casting site. Find an agent. Reach out to some production companies. Share your demo. Hope for the best.

My question for you, and challenge to you, is to let yourself break outside of that traditional box. Dare to come up with a new idea. The kind of ideas that mathematicians and astrophysicists come up with to solve crime for the FBI.

Has Your Brain Stormed Recently?

Of course, that may sound extreme. At the very least, you should really let yourself do some brainstorming. However that works for you.

Maybe it’s a big whiteboard and notepad. Maybe it’s spending a couple days in nature quiet with your thoughts. Maybe it’s a a group think tank or mastermind session that really helps you get the ideas flowing.

We’re creative people, and sometimes I feel like we run the risk of stifling that creativity by doing what “everybody else does” or what’s traditional or what’s the norm. Of course, it’s entirely possible all those things are right and proper and exactly what we should be doing. But it never hurts to open your mind up to what else might be possible.

If all else fails, maybe you could try binge watching NUMB3RS too.