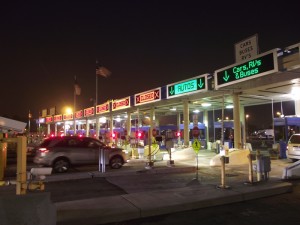 I got my passport back in April. Finally. After years of talking about. I finally went and did it. When it arrived, the first place I went was the Ponderosa in Niagara Falls, NY. I remember going to Ponderosa as a kid, and it was one of my favourite restaurants. But we haven’t had them in Ontario in a long time. Too long.

After my amazing experience at the Ponderosa, reliving my childhood and stuffing myself like a glutton, I came straight home and told my dad all about it. He, of course, was quite jealous. I told him we could solve that quite simply. He just needed to get his passport too.

He did. And yesterday we went.

On the way home, while crossing the border back into Canada I was given the usual interview by the border agent. She asked where we had been. How long we had been gone. Where we were from. You know the drill. Or at least, if you’ve crossed the border before you do.

Then she asked me a question I’ve never been asked at the border before. “What do you do for a living?”

“I voice stuff. Commercials. Videos. Things for TV. For radio. For the Internet.”

And so began the conversation with the border crossing agent, explaining the wonders and mysteries of the life of a male voice talent. What I do. How I do it. Things I’ve voiced.

So to anyone crossing the border from the United States back into Canada at the Queenston Lewiston Bridge around 7pm on Sunday, I apologize for the delay. But I promise… it wasn’t my fault. After all, when the border agent asks a question it’s imperative that you provide a truthful and adequate response!

QUESTION: What’s the strangest experience you’ve had explaining your job as a voice actor?