When I was a kid I wanted to be Casey Kasem. He provided half the character voices for my favourite cartoon, Scooby Doo, and he hosted my favourite radio show, American Top 40.

I would watch, and listen, faithfully every weekend! 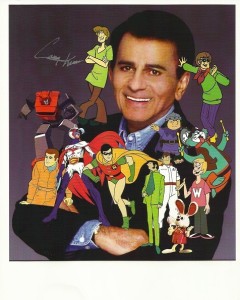 Eventually I did have the opportunity to become my hero. Sort of. In 1999 I started hosting a syndicated music video countdown that aired all across North American and in a few countries in Europe. In 2002 I voiced my first cartoon character. Which, funny enough, would also be my last! 🙂

Here I am in 2013, sitting at my desk on Saturday afternoon and what’s playing on my TV? Scooby Doo and the Boo Brothers! All these years later, Casey is still in my life!

I came across a story on Twitter while working this afternoon, that nearly broke my heart. An article titled, “Casey Kasem Has Just A Few Months To Live.”

According to a report obtained by TMZ, Casey’s wife Jean has stated that Casey Kasem “is terminally ill and unable to leave home.”

The report goes on to say, “Kasem has advanced Parkinson’s disease; may have early dementia.”

Kasem has triple digit acting credits according to IMDB.com with a career that dates back to the early 1960’s. You can check out his profile at VoiceChasers.com by clicking here.

I’ll be taking a moment today to say a prayer for the man who inspired me to pursue a career in broadcasting and ultimately, voice acting. Thanks to Casey Kasem, I’m living my dream!

Keep your feet on the ground and keep reaching for the stars! ~ Casey Kasem

QUESTION: Who inspired you to pursue your career?