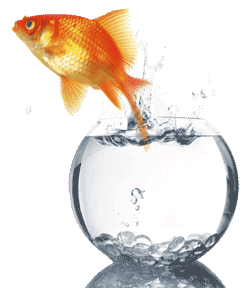 I read a story once about a piranha and a goldfish. Both, placed in the same aquarium.

A piece of glass was dropped into the tank to divide it into equal halves.

As you might expect, as soon as the piranha caught eye of the goldfish, it immediately tried to attack. When it did, it bounced off the glass. The goldfish swam around, unfazed and unharmed.

Once this cycle was repeated for a time, the piece of glass was removed.

What do you think happened?

Many of you might expect that the piranha finally got its prey. That is not the case.

In fact, the piranha continued to circle and stop just shy of where the glass was previously located in the aquarium. The goldfish, on the other hand, freely swam about the tank.

How Do You Limit Yourself

Take a few minutes to consider your own voice over career. Which fish are you?

Are you the piranha? Hungry. But held back by limiting beliefs? Do you stop just shy of your dreams? Do you circle around challenges and then turn away at the last moment?

Are you limiting yourself and your success because of a glass wall that isn’t really there?

Or are you the goldfish? Do seize every opportunity? Swim wherever you please? Nothing can or will stop you.

I know which fish I want to be.

QUESTION: Which fish are you?