I have a list I keep titled, “Greatest Hits.”

It’s a list of highlights and milestones I’ve achieved throughout the year. Everything from major clients I’ve developed a relationship with to adventures I’ve experienced. Business, personal, professional. It doesn’t matter. It’s just major accomplishments that I want to be able to reflect back on one day.

I added a new one on Wednesday 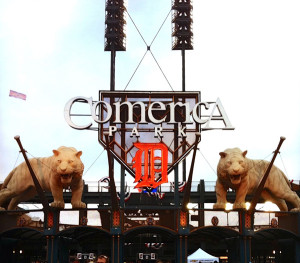 Last week when the Boston Red Sox clinched their spot in the American League Championship Series I knew I wanted to go. I’m a big Red Sox fan. Boston is an awesome city. Fenway is an amazing park. My first thought was to try and get there for an ALCS game.

Then I thought a little harder.

Detroit is only a three hour drive from my house. What if I drove to Detroit for an ALCS game, saving myself a good deal of money, and then took those savings and applied them to a World Series ticket if/when the Red Sox make the series? Yeah… that’s a much better idea!

That’s exactly what I did.

I found myself a ticket to Game 4 of the ALCS in Detroit! 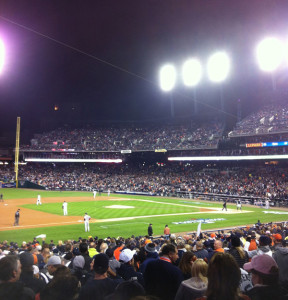 I had an amazing seat. Field level about 30 rows up from 3rd base. I was surrounded by some hardcore Tigers fans, except for this one family sitting directly behind me, dad all decked out in Red Sox gear from head to toe. His name was George. We quickly became friends!

Being at the park for a playoff game was absolutely one of the coolest experiences of my life and possibly the most fun I have ever had at a baseball game, maybe save for my first visit to Fenway for my birthday last year.

The Tigers fans were ribbing us few proud Red Sox fans all night long. But it was all in good fun. Of course, I’m sure it helped that the Tigers eventually went on to win 7-2. It gave them something to cheer about.

Win or lose, being there for the game was amazing. Walking around Comerica was so much fun. It’s a beautiful ballpark. Standing at the fence at 3rd base and watching the Tigers take batting practice was something I’ll never forget.

October baseball is one of my favorite things to watch on TV. Now I can say I’ve watched it live! If that’s not a greatest hit, I don’t know what is!

I only hope now that I’ll have the chance to add the other part of the dream to my list for 2013. Seeing the Boston Red Sox play in the World Series at Fenway Park. Preferably against the LA Dodgers.

My fingers are crossed!