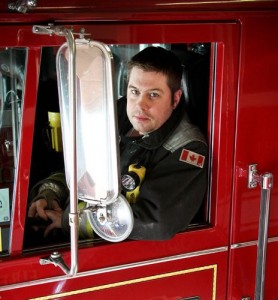 I had a call from a potential new client last Wednesday. She was looking for a voice for a training video project. The catch was, it would be a very last minute deal. Scripts would come in on the weekend and need to be voiced right away so the videos could be produced and launched on Monday (today).

I didn’t have any plans for the weekend, and I’m always looking for opportunities to develop relationships with new clients. I told her I’d be happy to work on her project.

Saturday morning around 7:30am I received an email informing me the scripts were being written. I told her just to send them when she was ready. That I’d be here waiting.

The first of four scripts arrived around 4:30pm. I looked it over, sent a quick sample to the client to make sure my read was on track with that she wanted, and when she affirmed that it was, I was ready to record. I got approximately two lines into the script when my fire pager went off. An emergency call for a ruptured gas line.

I stopped the recording, responded to the hall, got geared up and jumped in the back of the Pump. We raced across town to the scene, and with our four gas monitor in hand, I got off the truck with two other firefighters to investigate. I was relieved with what we found. The line that had been broken wasn’t gas at all. In fact, it was a water line. All was clear. A call that could have went on for hours went on for ten minutes.

Back home. Back to recording. I finished off the first script, got the files posted, notified the client and waited for the second script.

When the second script arrived I read it over and got right to recording. About two lines in… you guessed it. Another call! This time for a large grass fire.

I stopped recording, again, responded to the hall, got geared up and jumped in the driver’s seat of the Pump. We took off out of town to the area where the fire was reported. Upon arriving on scene we were directed to a large fire back in the bush. There was no chance we’d get to it. Not without getting the truck stuck in a field full of mud. On account of I was driving, I really didn’t want to be responsible for that.

An officer checked out the fire, spoke with the individual responsible for it, and we ended up returning to the hall.

Back home. Back to recording. I finished off the second script and was waiting for the third one.

The third script arrived just before 9pm. As with the first two, I looked it over and then started recording. I got almost two paragraphs into the recording this time, when… you guessed it. My pager went off again!

You’ve got to be kidding me!

This time around it was for a car fire. I geared up, jumped in the back of the Pump and got packed up. We arrived on scene to find one car, fully involved.

I grabbed the nozzle and started dragging out line. With my partner backing me up, we immediately went to work extinguishing the fire.

Back at the hall there was hose to be washed and repacked and air bottles to refill. I’m not entirely sure what time I got back home, but it was sometime between 10pm and 11pm.

By this time the client had sent the fourth script as well.

Praying that we were done with calls for the night (having had 5 in 24 hours), I got straight back to recording.

I uploaded the last piece of audio around 3:22am. I was exhausted, but I was happy. I still managed to get all four scripts voiced and delivered to the client ahead of her Sunday morning deadline.

Unaware of my evenings adventures in firefighting, and only aware of the fact that all of her last minute audio was delivered ahead of schedule, my new client sent an email. “You and I are going to have a wonderful relationship.”

That made it all worth while!

QUESTION: Have you ever had a project under a tight deadline where it seemed like everything was working against you to finish on time?